Skip to content
Buy 2 or more items and enjoy another 10% OFF instantly! Is this a new trend and if so what is the impetus behind it?  My opinion: Research shows that more women are wearing their hair natural and it is affecting the once lucrative relaxed hair market. Is it possible that salon owners are transferring the costs to women with natural hair? Playing devil’s advocate, could stylists be factoring in the cost of their time? It does take more effort to straighten natural hair. What is interesting is that the women who shared their stories in the article below did not indicate that they were given any particular reason for the difference in prices. But when a salon is charging $65 for a relaxer, and $100 and up to work with natural hair, somebody should at least have an explanation for it!

Is the Natural Hair Tax a Form of Discrimination? (Originally published on Madame Noire)

Have you noticed that stylists are charging more for natural hair? I have, but not until two months ago. A few days after Christmas, I strolled my happy behind into the Dominican salon that I had been a regular at for close to a year but when I went to the front desk to check in, things went a little differently this time. You see, I’m a natural who straightens her hair quite frequently. But for the past few months or so, I became concerned about the possible damage the constant straightening is doing to my hair. So I started wearing it straight for two weeks out of the month and in a natural style for the other half of the month. Back in December when I went to the salon, my hair happened to be in a natural style and it was a problem. They tried to charge me an extra $25.00 to wash, roller set and blow out the same hair that they did a couple of weeks before for half of that price. I quickly jumped on Twitter to voice my frustrations and within minutes, my boss, who is a new natural, confirmed that I’m not alone. 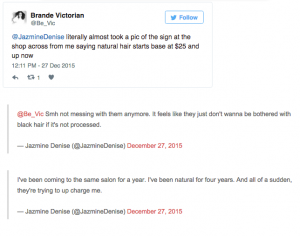 I never returned to that salon. But over the weekend, I tried my luck with another salon back in my hometown. I had been a customer at this spot for years, and I was sure that my girls wouldn’t pull any funny business. After all, they know me and my momma. Girl, bye! As soon as I walked in, I was greeted by a huge sign that informed customers that they would be charged more for natural hair. As I stated, I’ve been natural for years and this salon has never charged me extra but Saturday, I was informed that if I wanted my hair done, I would be charged double the price that someone with relaxed hair was paying. I quickly turned around and proceeded to walk out of the salon. The woman at the front desk chased me down and told me that she would give me a “discount” this time. “How is this a discount if it’s more than you charged me the last time I was here to get the same exact thing done?” I questioned.

After this experience, I went home and did some research and apparently, the “natural hair tax” is a thing. And after reading articles published by The Cut, Afrobella and Curly Nikki, I quickly realized that Dominican stylists aren’t the only guilty ones. While I had already encountered my share of black stylists who wanted to charge an arm and a leg to press or style my hair, I quickly realized that white stylists have also jumped on this trend. Afrobella recalls one experience:

"I walk into a beautiful, brightly colored, black owned salon. Some of the stylists have natural hair done up in intricate styles. The walls are adorned with African-inspired art. I feel like I’m in the right place. I look at the price list — relaxers cost $65. Hair color starts at $45. Rates for natural hair all begin at $100. And there’s an asterisk after that last zero.

It literally feels like I’m being slapped in the face when I walk into a salon and I’m told that I will be charged more because of my race and hair texture. I have no idea what I’m going to do with my hair going forward, but I have to admit that I’m feeling pretty defeated right now. My day-to-day life is pretty demanding and on the weekends, I don’t have much time or energy to be fighting with stylists about unfair pricing or dealing with the anxiety that comes with testing out a new stylist every other week."

Have you experienced the “natural hair tax”? Have you just surrendered? If not, how do you get around it?